Break out those colouring pens!!!


Because the new Rusty pickle is here!!!! And boy is it cool.

One of the best things about it, most of it is blank. ie you get to chose the colours!!!


Here is a page that i did using the normal pattern paper from Rusty pickle.

the stars on this layout are done using this pattern paper. It comes plain for you do colour in, so you can make it what ever colour you like!!!

The next page is did was usiing one of the premade pages. I used the pattern paper below. Again this is plain so i did was use my felt tips to make it whatever colour i wanted.

You can then add on anything else you want to. Rusty pickle have out done themselves this time in a line that is sooooo versatile!!
Posted by Wendy at 13:09 2 comments:

So Wendy sent me this little lot to play with... 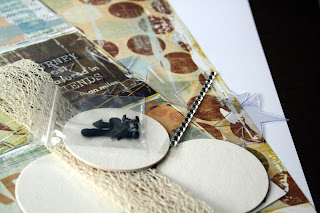 And this is the layout I created... 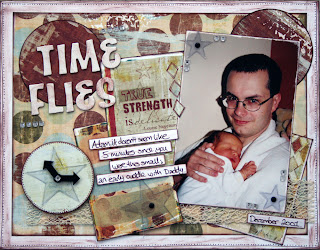 And here is how I put it together...

First I cut the white cardstock to 8 1/2" x 11".
I took the Adventurer sheet and cut it smaller than the base cardstock- approximately 9 1/2"x7". Ink all around the edge. 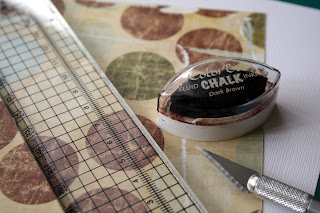 Next I cut 3 of the cards from the Papa Card Set sheet. I inked these around the edges.
Next I sanded around the edges of the photo, and lightly inked the very edge.
I took two of the cards, and arranged them fanlike with the photo.
The patterned sheet of paper was adhered to the white card base. then the ribbon stuck across, and the third card stuck just underneath.
Then I added the photo and cards on top. 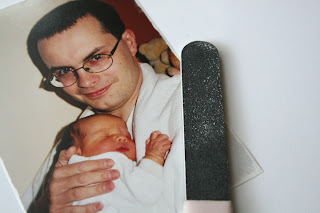 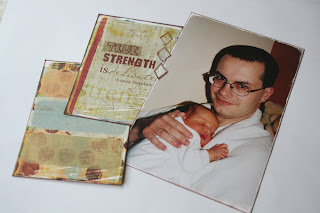 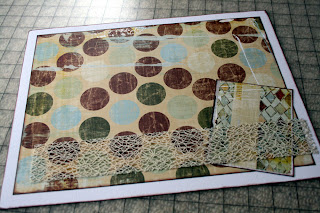 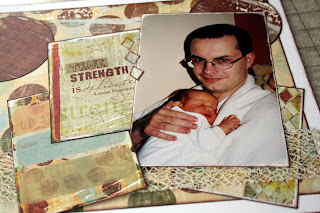 Next I made the clock embellishment.
I drew round a Technique Tuesday circle Tile on the reverse of the Adventurer paper, then stuck it to the tile.
I inked the edge, then stuck on a Heidi Swapp ghost star. I stuck it on using narrow double sided tape, in the position where the hands were to be stuck, this way the tape would not be seen.
I then stuck the black clock hands over the top, and finished with a sticky gem on top, and some doodled dots all around the inner edge. 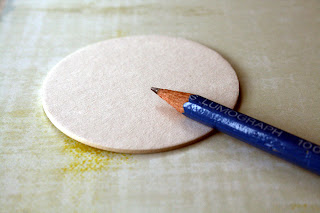 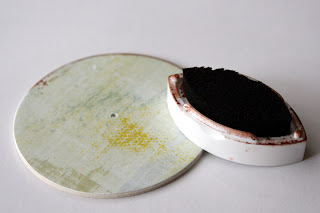 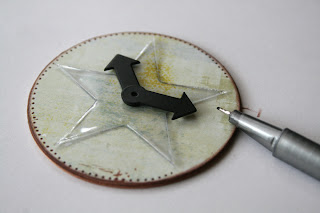 Using a large circle punch I cut 3 circles from the reverse of the Card Set paper, added to re-enforce the circle shape theme. 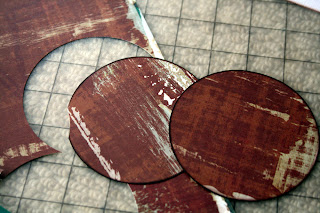 For the title I used American Crafts Thickers- Prancer White, but as I had run out of the letter E, I used upside down number 3s instead! I very slightly ran my cats eye inkpad over the top to distress the letters slightly. 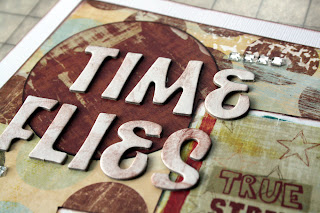 The journalling was written on to thin strips, and stuck down with foam pads.
To finish I added the clock embellishment, and some more of the Ghost stars, fixed on with small black bards.
And there you go, one layout. 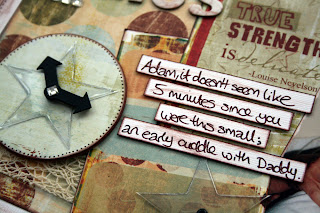 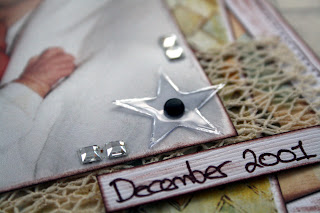 We want to see your pages using something from Basic Grey. Your entry must include the following..

THe rest doesnt have to be Basic Grey...
scallops
bling
a vertical title
and wendy's favorite, your journaling done in strips.

you have until the 8th of May to send in your pages, card or altered item and you can send in as many entries as you like. I will let you know what the prize is in a few days.
Happy scrapping

This card was made using the new Basic Grey line Sultry. This is a beautiful line and has the most gorgeous papers in it and is one of my favourites.

After that i hand sewed round the edge of the pattern paper with pink thread. You can also use a sewing machine or just just a pink pen for this part.

Step two... using a light blue piece of scrap cardstock i cut out a rectangle to the size of 8cm by 10 1/2 cms.I then inked in black in around the edges and adhered to the centre of the card.

Then using the pattern paper called Swell i cut it to the size of 10 1/2cm by 5cm. Inked the edges and adhered it to the card in the centre.

For the lettering on the card i used these letters to draw round. Added stick pads on the back to lift them a bit. Instead of an 'o' i used a selection of prima flowers and a glitter brad to hold them together.

You can either add the extra flower before or after adding the lettering. I added it after as it meant i could place it with precision.

The last thing i did was to ink round the edges of the card.

hi my name is Stephanie garbett i live in the west midlands classed as the black country. i am married to a wonderful man who i have been with since 1994 , we have two beautiful daughters Megan and Sophie.
i have been scrapbooking since march 2006 and love this hobby like mad, very very obsessed would be more to the point i like nothing more than, when the girls are in bed to have a chill out session of some scrappy goodness and when the page is finished pure satisfaction.

So a big box of 7 gypsies stuff turned up the other day and luckily i was there when the box was opened!!! ( i love it when that happens!!! lol)


So the new line in stock is the Nottinghill line. And it is gorgeous!!!
I did a page here with it. It has a gorgeous selection of papers in this range and it works perfectly with the colour red.

On this page i used alot of circle punches to make the embellishments and then just added a little red brad. The black swirls are done by using a crafters template and handstitching.

The picture below is of some 7 gypsies ATC new transparencies which turned up in the box as well. Check back soon as i am going to show you how you can use these on your pages if you dont do ATC's. And you will want to as these transparencies are just GORGEOUS!!!

Do you want to see something beautiful???

What happens when you send a scrapbooker a box of stash??? you get some gorgeous pages!!!

I cut the patterned paper to my preferred size this time adding the rubons to a selected few once glued into place stamped the fancy pants stamp then added my photo.

i cut and placed the flower at the bottom then added the cut out circle and a little of the rubon and button then using the two patterned papers selected parts what i wanted to use to make my flowers .
once done i added the diamonds and glued them into place the finishing touches where the title work doodling and stitching and a few extra rubons then mounted it onto my black card stock.

i started off cutting the patterned paper to my preferred size, mounting it onto my card stock then added the ribbons.
Once theses where in place i added my photo then used the rubons overlapping the fabric and down the photo.

using my eyelet setter, i punched out the circles around the photos next i cut the shapes from the patterned papers to place at the top of the ribbons adding part of the rubon then placing the diamond in the centre,then added the title for the finishing touch

I was sent some papers from the fancy pants Sweet Pea line to play with this month. They are the most gorgeous shades of greens, pinks and browns.

I really wasnt sure what to do with this paper and it is just so delicate so decided to keep it simple and just frame the photo with a swirl cut from a co ordinating paper and blossoms, bling and brads

And the winner is...

The winner of the competition is Angie, with this gorgeous page!!!!! Congratulations Angie, email me with your address and which pack you would like.

All other entries will be added to the readers gallery. Check back here in a few days and see what our next challenge will be!!!
Posted by Wendy at 13:03 3 comments:

The new line from Crate Paper is just gorgeous!!! In the page below i used the Katlin Line. It is so pretty,covered in flowers with the most amazing colours and each pattern paper is textured. Oh and a must is the diecut sheet, which is full of extras to add to your pages.

The papers i used on here are...

And the diecut sheet.

Dont forget to check our New Products section as there is always more new stock on the way.
Posted by Wendy at 23:20 No comments: