Hello - Lynn back today with the next two layouts I made using the 'Vintage Hollywood' collection from Graphic 45. Part 1 can be found HERE.

Both layouts have been created with just two sheets of paper from the range, together with cardstock and other embellishments. 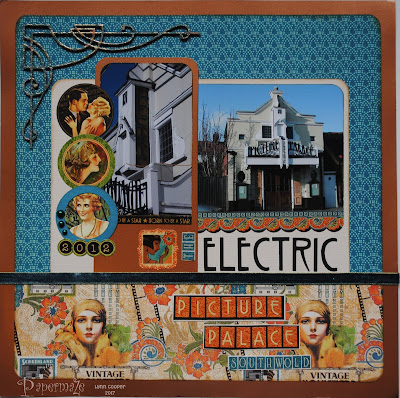 This layout features photos of the Electric Picture Palace in Southwold, Suffolk.

The base cardstock is a metallic bronze (sorry I'm not sure where it came from!). This was gutted to make a 1" frame.

A sheet of 'Dazzling Diva' was trimmed down to measure 11" x 11" and the corners rounded with a punch. This piece was then cut into two pieces measuring 11" x 8" and 11" x 3" making sure the images run in the right direction. I used the teal side at the top of the layout and the images side at the bottom. Later the join was hidden under a strip of teal, velvet ribbon.

All the edges were inked with 'Gathered Twigs' Distress Ink.

A piece of cream Bazzill 9" x 6" was placed over the teal patterned paper and another piece in bronze was cut to 3.25" x 6.5" and layered over the cream. The top two corners of both pieces were rounded off.


My photos were trimmed to fit the cardstock and added to the page. With strips from the cardstock sticker sheet to decorate the bottom edges.

I used two circular stickers from the same sticker sheet, and because I feel embellishments often work well in groups of three, I cut a third image from the reverse side of 'Tinseltown' paper (this was gutted from the next layout featured below).

I used letters and numbers from the sticker sheet for part of my title, and the word 'Electric' was cut on the Cricut using black Bazzill cardstock and the 'Nouveau' font from my PC.

The chipboard corner is from Dusty Attic and called 'Ornate Corner #2'. I embossed this with Stampendous Frantage - Aged Teal Embossing Enamel. 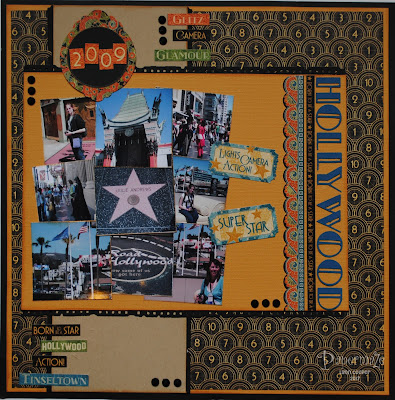 This layout features a selection of snapshots from our visit to Hollywood a few years ago.

I printed off nine small photos and trimmed these down to 2.5" x 2.5" in size. They were arranged onto the left side of the tan card - the right side was decorated with more of the cardstock stickers - borders and tickets. The title was cut with the Cricut and some leftover teal cardstock, the font is 'Art Deco'.

Other embellishments included a frame sticker backed with black Bazzill and number stickers. Word stickers and bling in the form of black flat-backed gems.

Back later with some cards using this collection later in the month.