When I first caught a glimpse of the Basic Grey Nook and Pantry line, I knew that this was a collection I would have to get hold of! The theme of tea and cakes alongside slightly retro floral patterns would be perfect for some of those seventies photos that can be so difficult to scrap. I decided to make use of the range when it came to scrapping this - one of only about three photos from the wedding day of my parents back in 1975.

Mum was only 18 and Dad 21 when they tied the knot, and it was a very low-key affair, a far cry from some of the lavish parties that people plan for their weddings today. And yet Mum and Dad, despite choosing to get married in flared trouser suits at the registry office, travelling there in the back of Grandad's Ford Cortina and having the 'reception' in Nan and Grandad's front room, have managed to clock up 35years of married life together. Which just goes to show...

I decided to use a template to cut a scalloped circle from a piece of pale cardstock, then backed this with some coral coloured floral cardstock. I stitched two circles using coral coloured thread on the scalloped shape, one large and one small to locate the journalling, then punched a scalloped circle for the centre, which I also stamped with a clock to represent the passing of time. The clock is only attached with a brad, so can be spun around, giving the layout an interactive element. 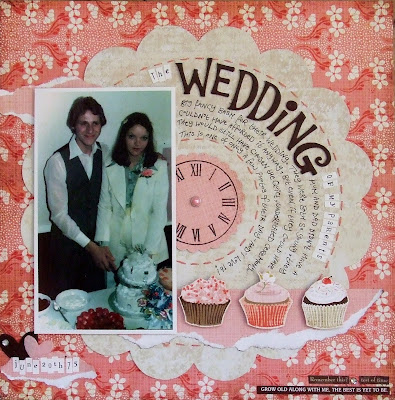 The cakes were carefully cut from another sheet of the cardstock, and foam pads were used to attach them and give them a 3d effect. I made the title using American Crafts chipboard Thickers and some Making Memories tiny alpha stickers. Finally, I used some 7gypsies stickers in the bottom right-hand corner to give the layout an overall balanced look. 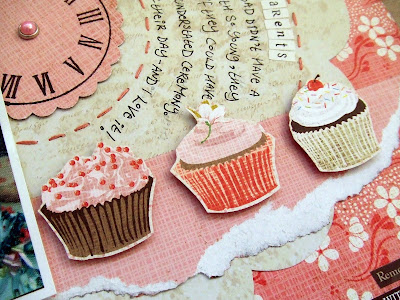 The sugary colours and cake motifs are perfect for the celebratory layout, and help to draw out some of the lighter tones from an otherwise quite dark and damaged photograph.

wow, wtg chloe, i love how you titled your page & journalled too!!!!

What a smashing page, I am a real succker for cupcakes. Love the journalling and sewing, great piccy of your Mum and Dad.xx Warmest wishes Anita..xx