Pink doesn't have to be girlie!

When I had finished my first two layouts with the Echo Park A Walk in the Park papers, I had quite a few scraps left over, so I decided to put togther a third page with the leftovers. Because most of the papers I had left were in small pieces, I decided on a 6x12 layout, and kept to the same subject matter of a day out in the Peak District. I had this gorgeous shot of my husband, his brother in law and nephew on a bridge in the valley, but I decided to break with convention and use pink accents to scrap about 'the boys'.

I cut a strip of the colourful grid paper and gave it a scalloped border using decorative scissors and my Cropodile. The piece of blue paper acting as a base for the photo was a scrap left over from my paper piecing layout - I simply trimmed the edges to size. The little journalling blocks were cut from the back of one of the papers, and I layered them up over the bottom part of the photo. 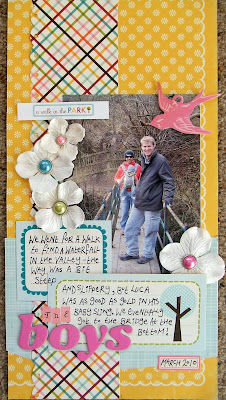 I stuck with the white paper flowers and used a range of colourful brads as centres. The bird embellishment is a die cut by The Girls Paperie Paper Girl range. 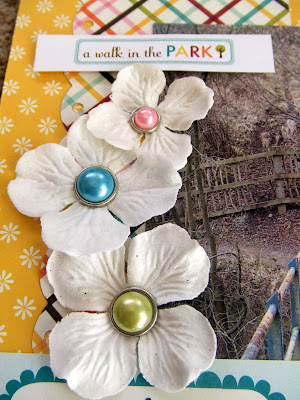 The tile is made up of a combination of pink chipboard American Crafts thickers and some My Little Shoebox alphabet stickers. The little date stickers is by October Afternoon. 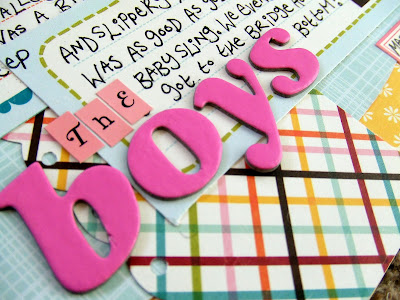 Even though the page uses colours that may not normally be associated with masculine subject matter, I hope the final layout proves you can break all the colour conventions and still make a successful page!