When Wendy asked me to choose a range to play with to create a Valentine layout for the blog, I just had to ask for the Little Yellow Bicycle Love Letters range.
She also threw in some other embellishments for me to add in too. 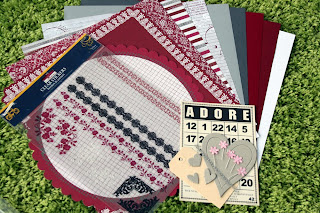 Before I started the layout I decided I wanted to make it interactive, and the most obvious way to do this seemed to be to include some sort of card.
As this would need a fair size space to accomodate it on the layout, I started off making the envelope so I knew how much other space I had left.
I loved the Solid Die Cut edge paper and drew around an old opened envelope on the reverse of the paper. 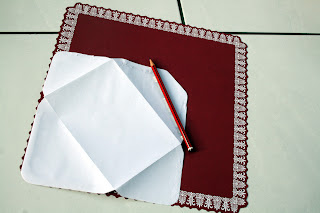 Once I had cut it out, I scored along the fold lines. 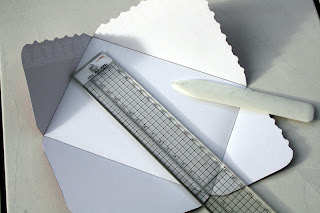 As this paper wasn't double sided, I chose to line the inside of the flap with some of the reverse of the Love Ledger paper.
Again I used the envelope to cut the correct size, and I also covered most of the inside below the flap as once the card would be removed from the envelope it is nice to see pattern underneath there too. 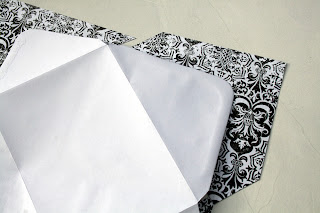 I inked all around the top edges using my maroon Cats Eye Chalk inkpad. 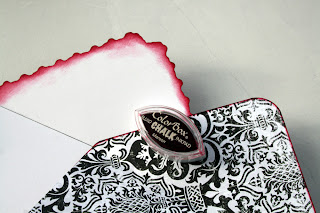 After sticking the inside paper in place, I folded and stuck the envelope. 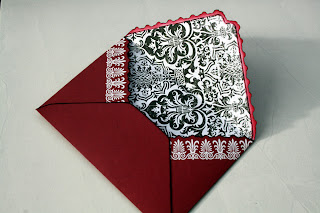 The basis of the rest of the layout would be the Grid Scalloped Circle die cut paper. 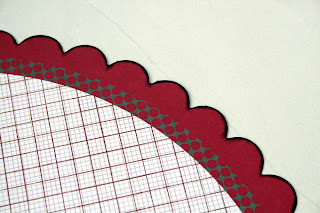 I stuck this to a pale grey base cardstock (from which I cut a large round hole in the centre as I hate wasting all that card!) and stuck the die cut circle in place.
Using my white pen I doodled a circle around one of the rings in the pattern just to add a little extra something. 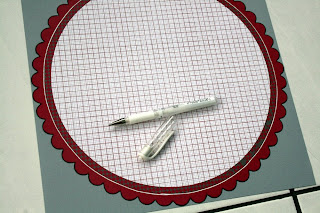 Next I cut a few small blocks of paper.... from the Stripe with Type paper... 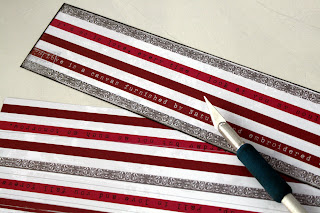 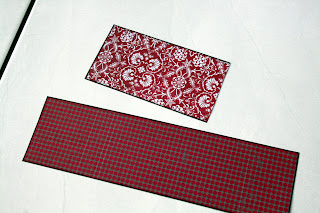 Then I adhered these to the layout like so- 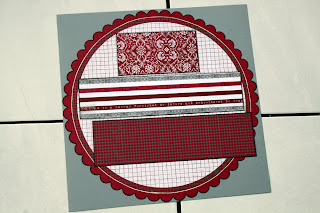 I now returned to the leftover Solid Die Cut edge paper, and cut a border from it.... 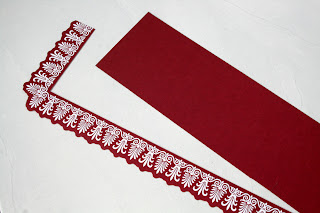 I inked the edge of this; then matted the photo onto some white cardstock, and inked the edges of that too.
Before sticking both these down, I laid the envelope onto the page to ensure I got the spacing right- then added the border and photo to the layout. 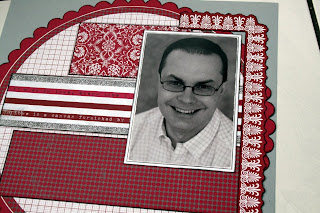 Next came the title, for this I used American Crafts Glitter Thickers Lax in white.
I stuck these onto a scrap of one of the papers I already used, then trimmed it to size leaving a small border. 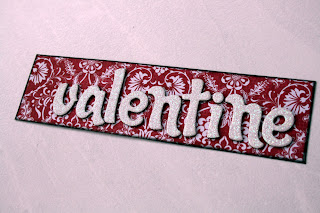 This i stuck near to the bottom right edge of the page. 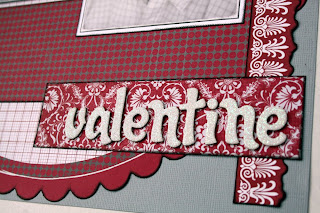 Now it was ime to start embellishing the page.
To make some decoartive corner accents, I used these pretty corner stickers from the Clear Border Stickers sheet.
I stuck them onto white card, then trimmed around the edges.
I added small 3-D foam pads to the back so once stuck down they gave extra height to the page. 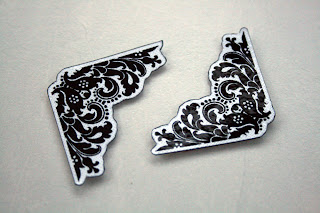 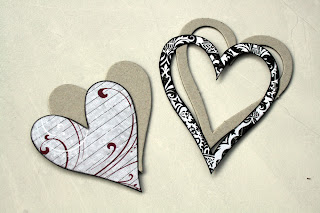 To make the card, I folded some white cardstock in half.
I cut a piece of patterned paper, which I matted using some of the leftover grey cardstock I cut from the middle of my base earlier.
In the extra embellishments Wendy sent me there was a blank tag; I used this as a template to cut a tag; and the heart was the middle piece I cut when making the covered chipboard hearts. 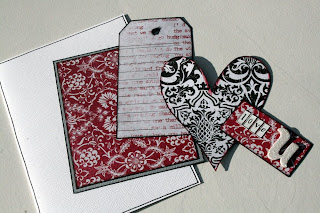 I assembled all the elements, along with a piece of ribbon tied through the tag, to make a simple but pretty note card. 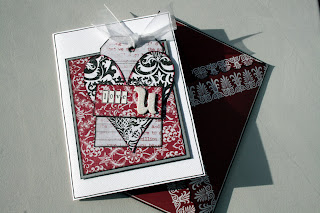 Now I stuck down the chipboard hearts, and added the little flowers and a touch of bling. 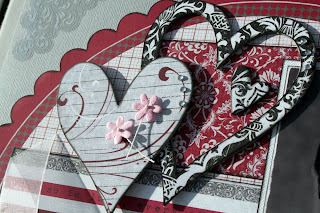 I also added some flowers to the title, and added a tiny gem at intervals down the side of the die cut border strip. 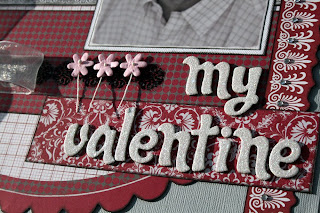 And here is the layout as it is without the card and envelope... 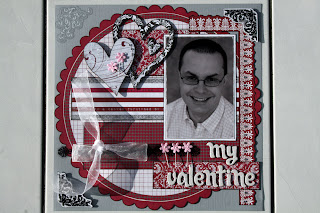 And the layout complete with the the card and envelope... 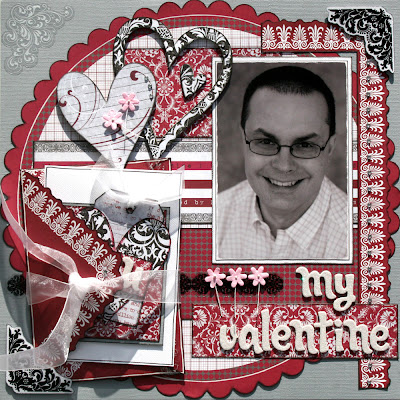 As you can see, the envelope can be tucked into one of the decorative corners to hold it in place, and a piece of ribbon stuck to the page means it can be tied on securely.

The card could be used as a Valentines card, to be given to your loved one, then added to the page afterwards to keep; or it could be used as a place to add some hidden journalling, maybe about how much your valentine means to you.
Posted by Unknown at 09:31

This ia absolutely beautiful. I am always looking for ideas on how to use the circle papers. Thanks you for shaing all your gorgeous layots, I really appreciate the step by step directions!

I really love this layout. And your step by step instructions are so helpful. I have a lot of these papers, so you've given me tons of ideas! Thank you so much!

oh wow this is so fab. It's nice to see something done with these papers. This is a gorgeous layout Angie

I speak a very bad english, but I think that I can say it's wonderful what you did with these papers... thanks thanks thanks