Do you Love Elsie?
I know I do.
So when Wendy asked me what I'd like to play with to show on the blog, I asked for some Elsie stuff.
The Zoe range to be precise.

A Few Facts (About You) 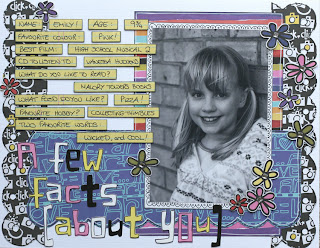 My inspiration for my first layout came from the idea of conducting an interview.
So I came up with some questions to ask my daughter.
We sat, and she gave me the answers.
But when it came to fitting it all onto a page, I began to struggle.
So I decided on shortening it all down to the bare facts.
I love writing my journaling on strips, and currently they tend to feature quite heavily on my layouts.

I turned the photo to black and white, I thought this would work well against the bright papers.
I stuck a white cardstock matt under the photo, then doodled around the edges in an Elsie-esque style.
Next I cut two different patterned papers to make large layers... onto the bigger one I also cut a scalloped edge.
Two strips down the sides again had the scallop treatment, but I also punched a row of holes down them. 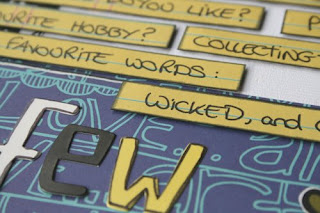 I was sent the alpha stickers with the papers, so that was my title sorted.
I wanted to make them standout a little more though, so outlined them with black pen. 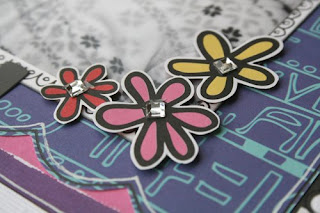 To fonish the layout, I cut lots of the flowers from one of the papers, and finished them with some sticky gems in the centres. 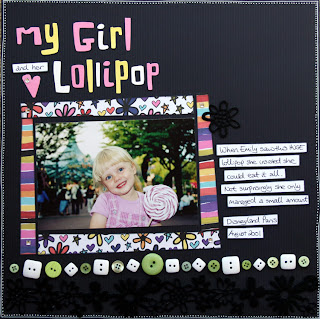 First of all I have to apologise for the rubbish photo of this layout.
In real life it looks ok, but try as I might I could not get the black felt against the black background to show up!

When I got hold of these papers, I started looking through my photos to find some that I had previously had trouble scrapping with, because of their colours.
Whilst quite a simple photo, I had struggled with this one because it has a quite busy, colourful background.
I thought putting it on the black, with a simple frame border around would mean all the clutter in the photo wouldn't matter.

My journalling strips again put in an appearance, and the title is very effective with it's bright colours that just pop from the page.
To make the frame for the photo, I simply cut 4 short strips of paper, and stuck them around it. 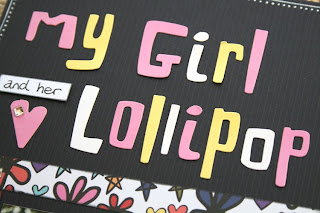 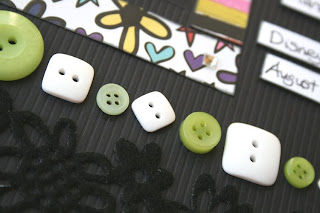 Wendy also sent me this mixture of white and green buttons; and a strip of Queen&Co. felt fusion in black.
I used both of these as borders along the bottom edge of the layout- I just wish the felt would show more, I hope this detail photo helps!
A couple of sticky gems and the layout was complete... et voila! :o)
Posted by Unknown at 20:51