Hello, Rebecca back with you today with a colourful mixed media layout using the Cocoa Vanilla Studio 'Legendary' collection and a cut-file. 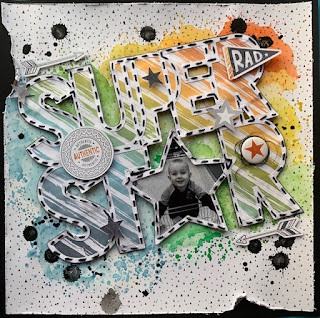 I decided to back the cut-file using the beautiful rainbow coloured 'Wild One' patterned paper. I think this is my favourite patterned paper from the collection because it's so colourful and bright. I left the star empty and backed it with my photo.

I have used the 'Epic Tales' patterned paper for my background, and seeing as I knew I wanted to add lots of colour to it, I prepped it with gesso first. (I've used clear gesso as I didn't want to lose the pattern on the paper.)

I've used watercolour paints to create the background - trying to colour-match each area to the cut-file. I finished the background off with some large ink splatters created by squeezing a saturated paintbrush from height and letting it drop onto the page. 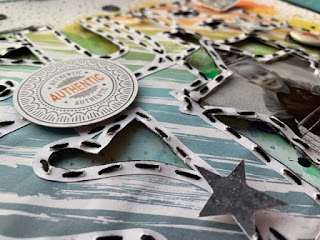 When I went to sit the cut-file onto the layout, I felt like the edges of the background looked a bit unfinished and bare so I trimmed the page down and mounted it onto a black border, adding a couple of torn areas to the edge to create added interest.

At this point I decided that the cut-file needed some black adding to it somehow to balance out the page. And this is where the butchering of the cut-file began!! I originally had my photo printed in colour, but decided to replace it with a black and white version. I'd stuck the cut-file down using foam and really strong double-sided tape. I had to carefully remove the cut-file from the background to replace the photo. I decided it still needed some more black, so I distressed the edges using a distress ink pad in 'Black Soot'. Next, I replaced all the double sided tape and stuck the cut-file back onto the background.

It still needed more black to balance the layout out. So I removed the cut-file again(!). I poked holes all around the edges of the letters and used black embroidery thread to hand-stitch all around them. In hindsight it would have been much easier to do this before backing the cut-file as I had to punch holes and stitch through two layers of card instead of just the one! As you can see from the photos, the cut-file has seen better days but from a distance you can't tell at all! 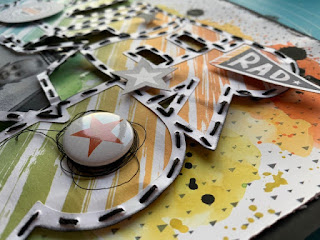 I finished the layout by adding a Flair Button with some tangled thread underneath, and some pieces from the die cut ephemera pack. I didn't want to overdo the embellishing as there was already a lot of colour on the page, and I was actually really happy with how the layout looked so I stopped.

I hope you've enjoyed this layout, I'll be back later in the month with another, which I'm pleased to say came together without any butchering!

That is a SUPER layout Rebecca, love the way you have used the colours in these papers. I have some and can't wait to give them a try. x

I love this Rebecca! Such an eye catching page! Xx