One of the easiest ways to improve the design of our pages and achieve a balanced overall look is to use the design principle of the visual triangle. The visual triangle helps to unite the elements on a page and pull them together, and also gives the eye a natural path on which to travel around the layout so that the viewer can take in all the elements one by one. The visual triangle is embedded in the idea that the eye responds far better to designs including odd numbers of features rather than even numbers – placing just two of any embellishment or photo tends to leave the eye flitting back and forth between the two rather than allowing it to take in the whole layout.
The following layouts show several different ways in which you can incorporate the visual triangle into your pages, hopefully leading to layouts which are eye-catching as well as visually balanced. 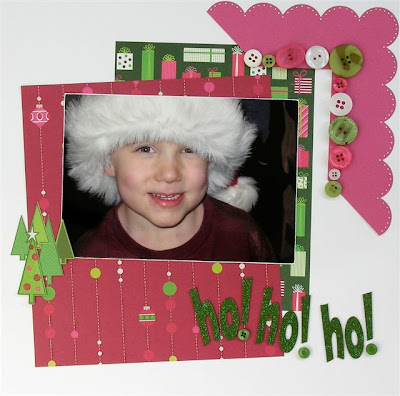 The first layout is by Hazel who has used the visual triangle to great effect on this simple but very striking page. The main photo is strong in itself but to ensure the eye travels around the page, Hazel has placed her embellishments (the buttons, trees and title) in a clear triangle. In fact, one side of the triangle crosses directly through the eye-line of her subject, bringing further focus to gorgeous subject of the page. Hazel has also helped to unite the design by using similar colours for the embellishments which form her visual triangle. It is worth noticing too that Hazel has stuck to the rule of odd numbers too with the five trees clustered together and the three words forming her title. 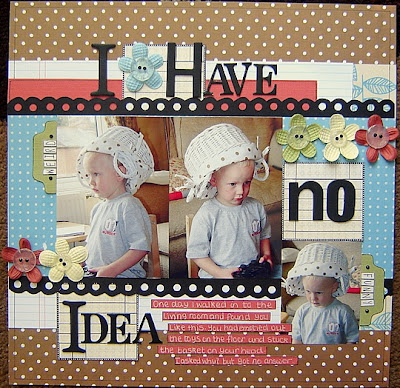 In this layout, Wendy has also used the principle of the visual triangle but in a subtler way. The little paper flowers are positioned in a triangular design around the layout, again crossing through the eye-line of her little boy, helping to draw attention to his face. While she has used a four word title, she has arranged the words in three blocks which form another triangle around the page and reinforce the overall design. Finally, Wendy has used three green elements which also help to create balance. 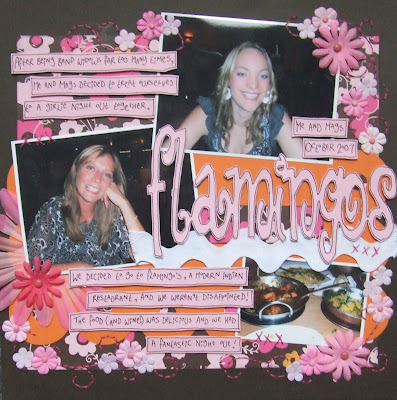 Finally, in my layout, Flamingos, I have tried to show how the principle of the visual triangle can be used even on a very busy page. Firstly, I have arranged the photos themselves into a triangular design which helps to lead the eye around the page (in this case I have printed one photo at a smaller size as it allows the eye to naturally focus on the two more important photos first – too many photos at the same size can cause the eye to become confused as to what to look at first!). The blocks of journaling strips are also arranged in a triangle, giving balance to what might otherwise be a chaotic page. The flowers are grouped into three main clusters on corners of the layout, giving a sense of unity to the design. And I have even used the triangle principle with the little stitched crosses which add a touch of detail but do not detract from the balance of the page.
Hopefully this has given you some ideas as to how you might use the principle of the visual triangle on your pages, whether your style is clean and simple like Hazel’s or very busy like mine. But remember, rules are there to be broken so make sure you experiment – you might find that a four point diamond formation works well on your pages, or perhaps a circular design with no points at all is best for you!
Posted by CloClo at 12:04

This is a really interesting post Clo, very imformative and a pleasure to read, thank you for it :-)....and some beautiful pages to compliment it too!
Anita.xx