Hello, Lynn here with the second pair of layouts using the bright, summery August Papermaze Kit. The first two can be found here. 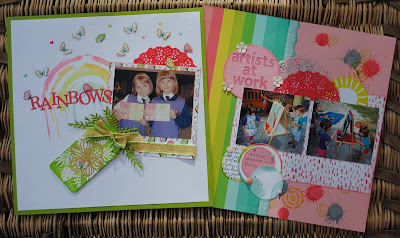 A quick reminder of the kit contents 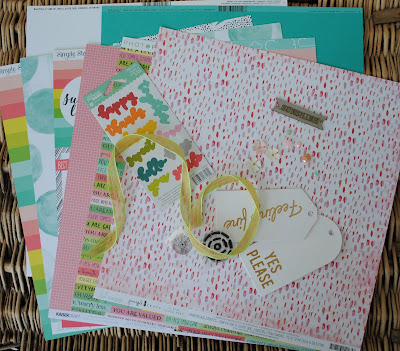 My first layout for today is called 'Rainbows', and shows a photo of my girls the day they enrolled as Rainbow Guides. 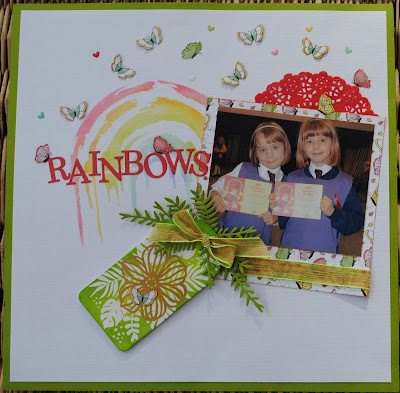 I used the 'Intense Kiwi' Bazzill cardstock to make a 1" frame for the layout, by gutting it. Then I trimmed an extra piece of Avalanche down to measure 11.5" x 11.5".
I created a rainbow to the left of the centre using a new stencil from Stencil Girl called 'Little Painted Rainbows'. I used several colours of Distress Ink and a blending tool. 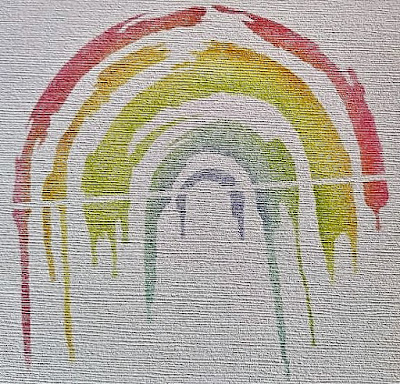 I made a frame for my photo using some of the Photoplay - 'Encourage' paper (butterfly side up), 5.5" x 5.5". I used some of the ribbon from the kit to run along the base of the mat.

I used one of the Amy Tangerine Resist Watercolour Tags from the kit, and blended Mowed Lawn and Twisted Citron Distress Ink over the surface. More of the ribbon was tied in a bow over the hole in the top of the tag. From the 'Intense Kiwi' Bazzill I cut some fern leaves using Sizzix Thinlits dies from the Funky Florals #3 set.

I used half of one of the Doodlebug Designs doilies above the photo, tucked behind the mat. My title letters were die cut from 'Blush Red Medium' Bazzill.

I cut lots of the butterflies from the 'Encourage' paper and scattered them at the top of the layout, and one on the tag. Finally, I used the tiny Doodlebug enamel hearts in amoungst the butterflies.

My second page today is called 'Artists at Work', and features my three on the patio in our garden painting at the easels. They were about 2 years old. 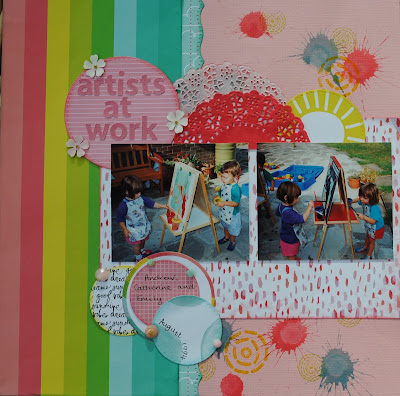 To start I took the sheet of Blossom Bazzill. Then the remainder of the 'Life is Good paper, and with the strives running vertically I cut a 12" deep section with a stripe of each colour which made a panel just under 5.5" wide. This was stuck to the left side of the cardstock. leaving the right hand edge unstuck so I could stuck the trimming under later.

I used Distress Stain in Weathered Wood and Worn Lipstick to daub splats over the pink cardstock. Then I used the Woodware stamps from the kit again and inked and stamped them with Mustard Seed and Evergreen Bough Distress Ink.

With the remains of the 'Coral Reef' paper I cut a piece 9" x 5" and stuck this horizontally across the layout from the right side overlapped the stripe paper. Then came the circles. I used a set of nesting circle dies to cut various sized circles using the '3x4 Elements' paper for the sun and the rainbow bordered circle, the pink striped side of the 'Coral Reef' paper and both sides of the 'Tidepool' paper.

My title was added to the circle with the pink stripes, using some very old Sassafraslass pink glitter alpha stickers from my stash. I added journalling notes to the other circles. I cut a doily in half and together with the photos I arranged the circles and on the page.

Finally I added embellishment with the Tiny Prima Flowers and Crystals to some of the circles.

The great thing is there is still plenty of kit left for a few cards. Great value for money as the kit is only £10.00 and the additional cardstock is £1.75. Four layouts and some cards or part of another layout.

Back with a new kit for September later in the month.
Thanks for looking.
Lynn x
Posted by Lynn at 08:00

Super layouts Lynn and I love that rainbow stencil. x

Thanks Karen, think I will be making good use of that setncil. x