Hello everyone, Rebecca with you today. I hope you all had a lovely Christmas! It was a very different one for us, spending it as just the three of us, but I'm grateful that we were safe and healthy. It just means that it will be extra special next year when (hopefully!) we can spend it with family again.

I'm stopping by today to share my third layout using Simple Stories 'Jingle All The Way'. I've chosen to document my little boy posting his letter to Santa on this layout. He's at an age now where he understands more, and so we can do more and this was the first year he'd written a letter to Santa! 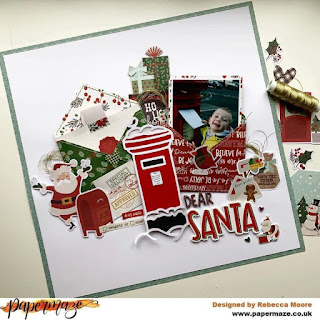 There was so much I wanted to try and get onto this layout, so I had to get a bit creative and add a couple of interactive elements - a first for me!

I used my Silhouette to cut two envelopes from the 'Happy Ho Ho Ho' and 'My Christmas Wish' patterned papers. I then hand-stitched around the edges of the envelopes using a gold metallic thread by WRMK, before constructing them. 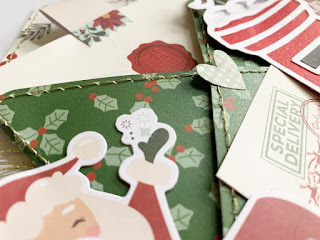 The next element I was desperate to get onto my layout was a postbox cutfile from Peartree Cutfiles. I backed it with red and black Bazzill Basics cardtocks, used white cardstock for the snow, and added white glitter to it for a bit of shimmer. I finished my postbox with a bit of doodling on the front, and I love how it turned out. 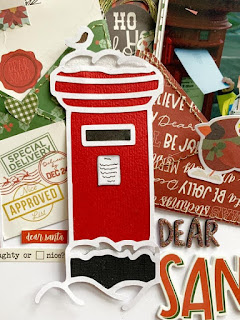 Once I'd decided where I wanted my envelopes and postbox to sit on my background, I worked on my interactive elements. There is a section on the '3x4 Elements' patterned paper which resembles a letter to Santa, so it was perfect for this layout. I strategically folded my son's letter to Santa so that it was slightly smaller than the cut-apart element, and stuck it to the back in such a way that it was still possible to fully open it up to read it. (I kept his original letter for this layout and he posted a photocopy to Santa...Sssshhhhh!) I then folded over a tab from the Journal Bits & Pieces pack to create a 'handle' to pull the letter in and out of the envelope. 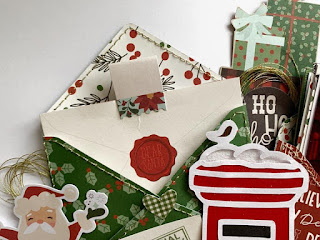 I've used my other envelope to hold several photos of my son posting his letter to Santa. I had four photos I really loved and wanted to get onto this layout so I decided to make a little fold out mini-book style element to hold them. I cut a strip of white cardstock and scored it in several places so that it could be folded up to be slightly bigger than 3x4 inches. I made sure that it had 3 sections so that it could hold 6 elements in total. I've used my 4 photos, and also 2 of the 3x4 cut-apart elements, all mounted on either cardstock or patterned papers from the collection. 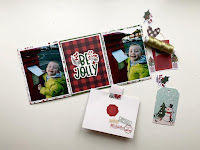 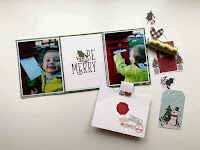 Once the interactive elements were complete, and slotted into the envelopes, I added my title. I've used the word 'Santa' from the Foam Stickers and selected the letters to spell out 'Dear' from thickers in my stash. 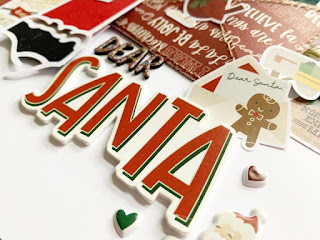 Once my title was in place, I moved on to embellishing my layout. I've used several stickers from the Combo Cardstock Stickers and some die-cuts from the Bits & Pieces pack to create some clusters either side of my envelopes, with some gold thread tangles worked in to add some texture. 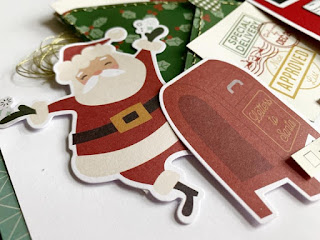 I also managed to work in one of the '2x2 Elements' which had been on my list of things to include on this layout! I had an empty space at the top of my layout, in between the two envelopes that didn't look right so I fussy cut some presents from the '3x4 Elements' patterned paper, and slotted them in the gap with a round cardstock die-cut from the Journal Bits & Pieces in front.
As is quite usual for my 'style', I decided my layout needed framing - so I created a border using a Simple Stories patterned paper from a previous collection.
I then finished my layout with a couple of Puffy Stickers underneath my title. 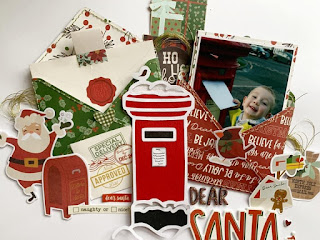 If you'd like to watch how the layout came together, and see the interactive elements in use, there is a process video on my Youtube channel which you can find here.
Thanks very much for reading, I hope you've enjoyed this layout. I've thoroughly enjoyed working with Jingle All The Way - it is quite possibly my favourite ever Christmas collection! There have been some re-stocks in the shop recently so please head over and have a look.
I'm working with Carta Bella - Winter Market Collection next so I'll be back in the new year to share my creations.
Until then, stay safe and have a great New Year!
Rebecca x
Posted by Rebecca Moore at 09:00