Hello, Rebecca here with you for the first time this year - so Happy New Year! Not quite the start to the year we were hoping for, but hopefully scrapbooking will see me through this lockdown like it did the last one! (Well... that and the gin...!)

This month I’m working with Carta Bella’s ‘Winter Market’ Collection and seeing as it’s a very wintery/snowy collection, and we’ve not had any snow at all here in the Chilterns for over a year, it’s giving me the opportunity to scrap some older photos. 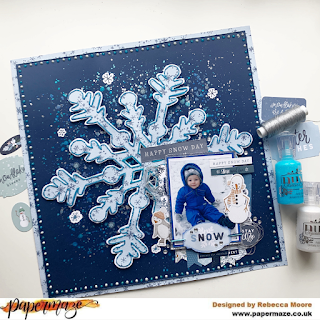 I started with the ‘Snowmen’ patterned paper and cut a large snowflake shape from the B side. The cutfile is by Peartree Cutfiles and was perfect for this collection and my photo. If you don’t have an electronic cutting machine, you could always draw or trace a snowflake onto the paper and cut it out by hand - it would give exactly the same end result. 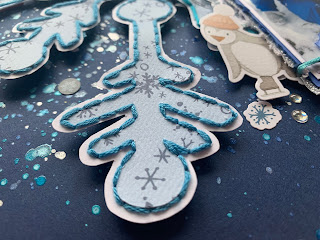 I put my snowflake to one side, and worked on the background of my layout. I’d selected a dark blue Bazzill Basics cardstock from the Matchmaker Pack for my background, but wanted to add some colour and interest to it. I kept my mixed media very simple and just used a paintbrush to add paint splatters - that’s it! Nothing difficult at all, but because I’ve used shimmery paints, it’s really effective. I’ve used a Cosmic Shimmer Iridescent Watercolour paint, a Shimmerz Paint and a Lindy’s Starburst Spray all in shades of blue (all from my stash). I added some final splatters using a Distress Spray Stain in ‘brushed pewter’ - which is a metallic silver shade. Once this was dry, I stick my snowflake to my background with a layer of craft foam underneath to lift it off the page and help it really stand out 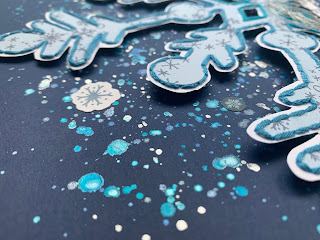 As is often the case with me, I felt like my layout needed a frame, so I used the outer edge of the ‘Snowmen’ patterned paper to create a border. This is really simple to do - I just trim 1/4 inch off each each side of my background cardstock, distress the edges with my scissors and then stick it down to the border using double sided tape. The distressed edges are obviously optional - but I love the added texture it brings to a layout. Handy tip - if you don’t want to waste a whole sheet of patterned paper adding a border then you can ‘gut’ the middle section out before sticking, and retain it to use on another layout.

My photo has been matted onto white cardstock, then a second time onto blue Bazzill Basics Cardstock and then for some added sparkle, I’ve brought in a layer of silver glitter cardstock too. 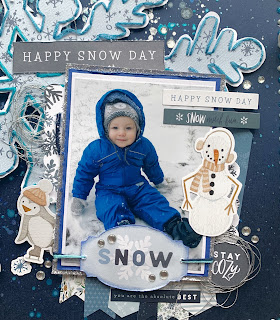 I’ve then built up the area around my photo using the Elements Stickers - which is fab in this collection and contains so many stickers, and also some die cut cardstock pieces from the Ephemera pack. I’ve raised some of the embellishments up onto foam pads to bring in even more dimension so that my embellished area doesn’t look too flat. I’ve also pierced holes into the ‘snow’ die cut and threaded two different blue embroidery threads through to bring in another texture. I’ve added two thread tangles using the gorgeous metallic silver thread by WRMK. I love this thread so much and it also comes in gold which is equally as fantastic! I’ve scattered a few clear gems around my photo too, in an attempt to mimic some snowballs!

Ive added to my background further, with a few of the tiny snowflake stickers from the Elements Stickers sheet, which I scattered in amongst my large patterned paper snowflake. 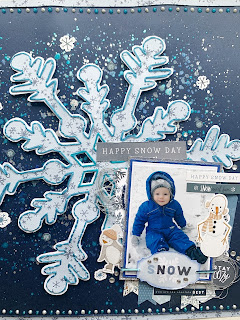 And my layout was completed with the addition of a Nuvo Drop border all around the edge of the page. I’ve used Ivory Seashell and Blue Lagoon, which has glitter in it! 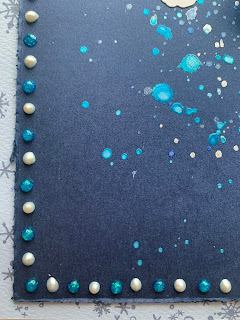 If you’d like to watch how the layout came together, I have a process video up on my YouTube channel, which you can find here.

Thank you for reading today, I hope you’ve enjoyed this layout. The collection is still available in the shop and don’t forget there’s 20% off at the moment in the January sale!

Until next time, take care.