Hello everyone, Rebecca here with you today.  Happy Halloween week! (Yes, it's a whole week affair for me!) I love Halloween so much so we usually find lots of local events to go to and things to take part in during half term, leading up to the big day itself, however this year is obviously very different. Although there are still lots of events happening around where we live, we have decided to stay home and make our own Halloween entertainment this year and stay safe.

Today's layout documents the start of our 'at home Halloween fun' - a pumpkin photoshoot in our living room! And what better collection to use than the new Simple Stories 'Boo Crew'?! I am loving this collection - it's probably one of my favourite ever Halloween collections. I love that the whole collection is made up of really only four colours. I've found that it's helping layouts come together really easily - which is always a bonus for me as I'm a notoriously slow scrapbooker. 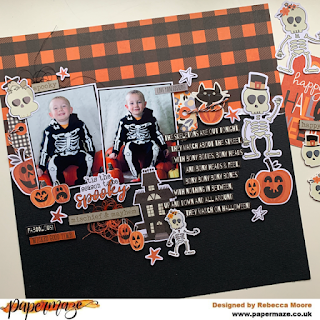 This entire layout was inspired by a section of the 'Cast a Spell' patterned paper. It's a poem about skeletons and bones and instantly I had an idea for the back bones of my layout (pun intended!). My son has a new Halloween tracksuit set with skelly bones on it so these photos were perfect to go with the poem. The ideas were flowing and I ran with them...

Since it's Halloween, I've gone with a black bazzill cardstock background and have torn a section of the 'Treat Yo'self' patterned paper for the top half. I've matted my photos onto black, and then white cardstock to give them some separation from the black background. I knew I wanted the photos to sit on the left of the layout with the poem cascading down to the right. So then I just had to decide on the rest of the layout. 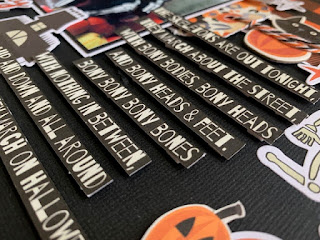 I pulled some tags from the 'Tags' patterned paper and tucked them either side of my photos with some Halloween Devine Twine threaded through them. 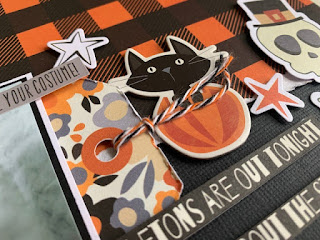 I then begun to pull out alllllll the skeletons from the collection. I spent ages faffing and trying to fit as many skeletons on the page as possible. In the end I had to reign myself in because I was getting carried away! I placed the large male skeleton from the Bits & Pieces ephemera pack to the right of my poem. I felt that the ivory skeleton with the white border was getting a bit lost against the dark background of the layout, so I drew around the outline of all the bones with a black fineliner pen and I was so much happier with him. I tried to get the female skeleton on the layout too but in the end decided she was one skelly too far! 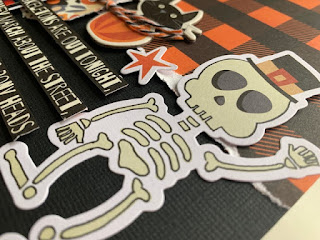 In my photos, my little boy is sitting among all SIXTEEN of our pumpkins (told you I love Halloween!!) and so it felt very appropriate to have lots of pumpkins on the layout. I took a couple from the Bits & Pieces pack, and fussy-cut the smaller ones from the 'Hey Pumpkin!' patterned paper, and scattered them around the layout. 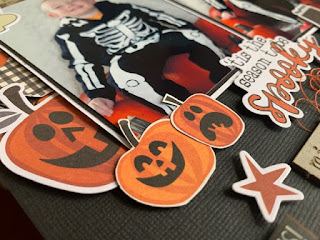 I placed a skull with a frog sat on top to the top left of my photos. He's from the Bits & Pieces pack and just had to make it onto the layout as my son's nickname is 'Froggy'! Next I added a scattering of stars around the layout and a smaller version of the female skeleton from the Combo Cardstock Stickers - again drawing around the bones with a black fineliner to help her stand out more. I also added the large haunted house from the Bits & Pieces pack - the photos were taken at home and it's a house - so that works for me, and also a cat sat in a pumpkin from the Chipboard Stickers. 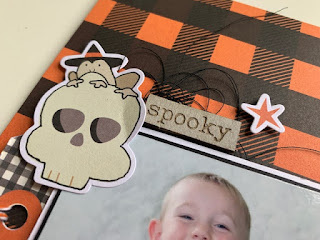 I used the 'Tis the Season to be Spooky' ephemera piece as my title and again drew around each element with a black pen.
I finished my layout with a phew of the phrase stickers from the Combo Cardstock Stickers, two pieces of laser cut chipboard from Dusty Attic ('Wordpl@y #6' set) and tangled some thread behind both of them. 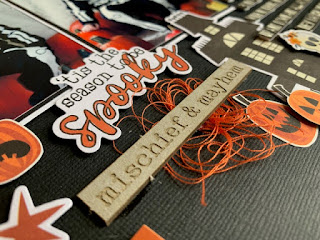 I decided to stop there before I tried adding any more skeletons onto the page! I hope you've enjoyed this layout - I think it's one of my favourites of 2020. I'm enjoying this collection so much that I've ordered a whole lot more of it. Don't fear though - there's still some left in the shop if you'd like to pop over and place an order.

If you'd like to watch how this layout came together, you can find the process video on my YouTube channel here. 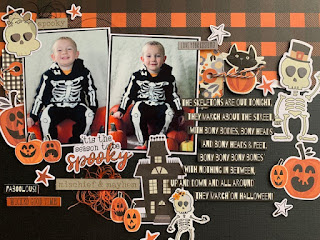 I'm sure I'll be back with some more Boo Crew layouts over the next couple of weeks as I get more Halloween photos to work with. I just can't help myself!

Until then, take care and have a Happy Halloween!