Lynn here today - I had plenty of paper, Bazzill and some embellishments left over from the Papermaze Kit for January, after making four layouts for the Design Team. This time I have a scraplift for one layout and a sketch for the other (links for both in the details). Here are the first two layouts: 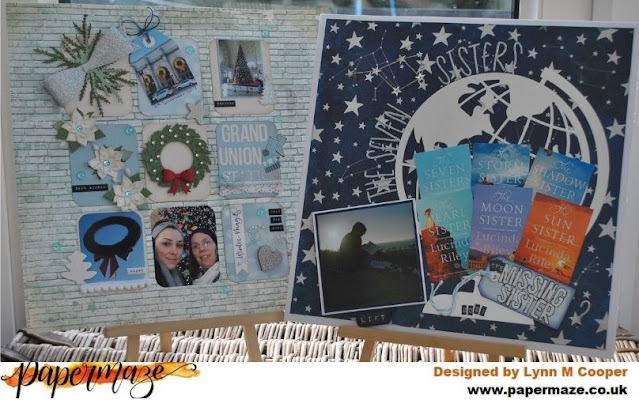 A reminder of what you will find in the kit: 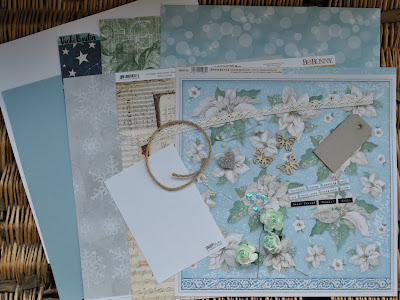 Please see details of the kit in the first post HERE.

Grand Union Station - The photos are from our trip to Washington DC and Grand Union Station where we saw a massive Christmas tree covered in Norweigan and American flags. A gift from Norway in gratitude for their help during and after WWII. Outside the station entrance were three gigantic Christmas wreaths, with large red bows and covered with tiny white lights. 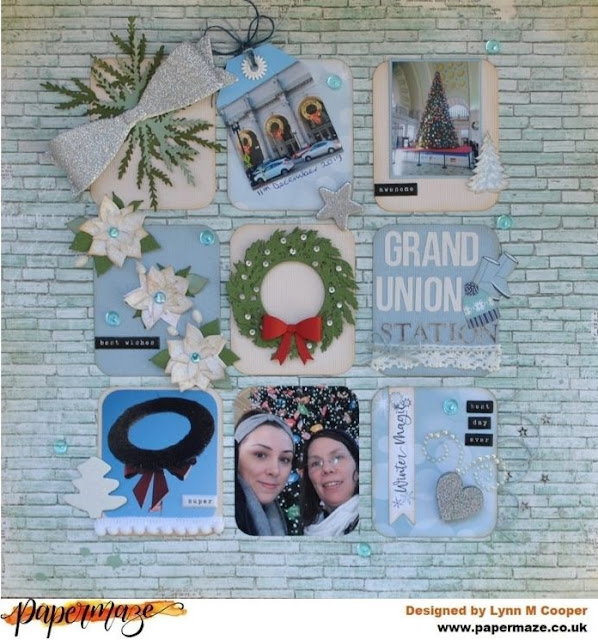 This layout is based on a scraplift of a digital page from Sweet Shoppe Designs. 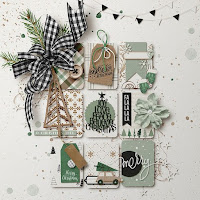 I used the Bo Bunny - Traditions paper as the background, and cut nine pieces 6.5 x 7.5 cm from Vanilla and Blind Date Bazzill and scraps of the Winter Magic paper. These were arranged in three rows of three on the page, each one being embellished before being glued into place. I rounded all the corners, and inked all the edges.

The first was adorned with a large bow cut from glittery foam using a Sizzix Sizzlit - Bow Tied. The greenery for this was cut using Ivy Bazzill and a few scraps of lighter green bazzill scraps, using the Funky Festive Sizzix Thinlits die set.

For the second piece I made a tag using one of the photos, a brad and two lengths of blue twine.

The third piece has a small photo and a tiny tree, fussy cut from the scraps of the Winter Magic paper. I added one of the puffy word stickers.

On the next row the first piece was adorned with three poinsettias cut from white and Ivy Bazzill, I used the Funky Festive die set for this too. I inked the edges of each piece and added the Tim holtz glittery stamen and blue gems to the flowers. Then I added another puffy word sticker. 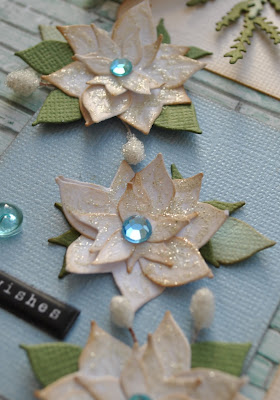 My second piece is decorated with a wreath to reflect the ones in the photos, I used Ivy and scraps of red Bazzill. I cut the wreath twice (Wreath and Snowflake Sizzix die set), and off set them to give a thicker appearance. I added tiny clear gems. 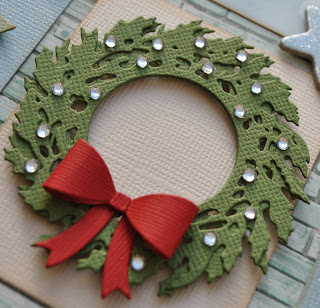 Next I used the Sn@p letter stickers from the kit and some silver letters from my stash. I used some of the lace from the kit, with more of my blue twine and two more images cut from the Winter Magic paper. 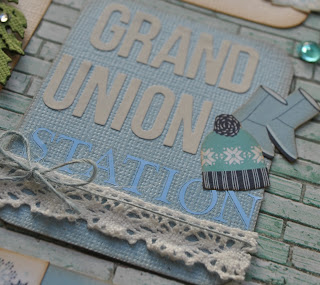 For the third row - first another photo mounted onto the card, then trimmend with white bobble braid. Then a full photo for the next piece.

The last piece is decorated with the resin glittery heart and the plearl swirl from the kit, more puffy word stickers and the wording from the Winter Magic paper's manufacturer's strip. 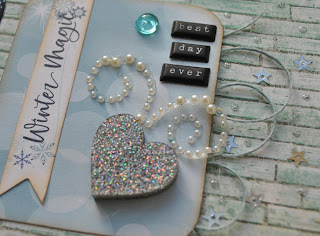 These were all stuck in place and further embellishments added. I used more twine and some silver star sequins, some dew drops, and a couple of chipboard pieces.

The Seven Sisters -
From my journalling : “My mum, my daughter and I have all been enjoying the Lucinda Riley – Seven Sisters stories. The series follows the sisters, and begins as their adoptive father, who  they call Pa Salt, dies. They are each given a clue as to their past. Each book is the story of one of the sisters as they trace their origins all over the world.

The sisters are each named for one of the stars of the Pleiades (‘The Seven Sisters’) constellation. So far we know about six of the girls, but there is mystery surrounding a seventh sister, and her story is to be published later this year and is called ‘The Missing Sister'.
We are waiting impatiently!!” 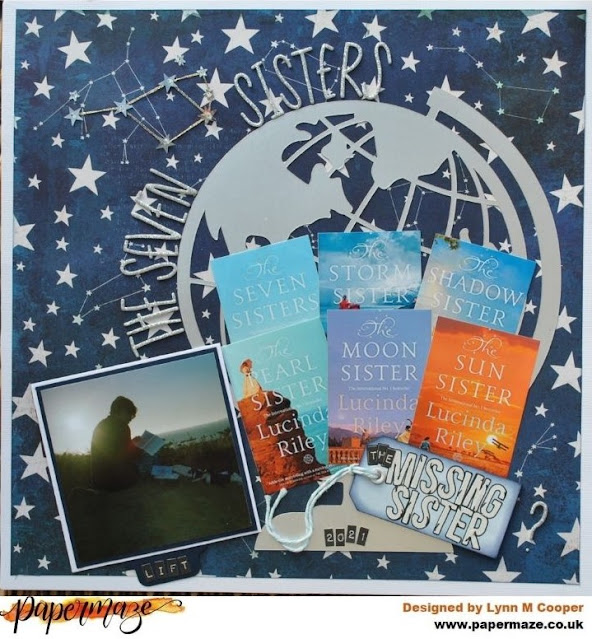 For this layout I used a sketch by Jana Eubank, although I adapted it so much it's no longer much like the sketch!! 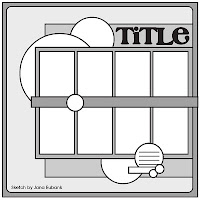 The Stardust paper was ideal for this page as it has many star constilations; I trimmed this down to 28.5 x 28.5cm and mounted it over a White Bazzill frame 2.5cm deep and 12 x 12cm in size.


I used a cut file by Paige Evans to cut a globe to represent all the travels in the books, I cut this from a matt silver card.

Six small photos of the book covers were arranged over the base of the globe, I used the chipboard Tando Tag and covered it with a scrap of Winter Magic paper. With some of the Sn@p Alpha stickers I added the title of the next book. I inked the edges, adding a large eyelet and some Baker's Twine. I outlined the letters to help them 'pop'.

With some silver thread and a few star sequins, I created the Seven Sisters star cluster in the top left of the layout. 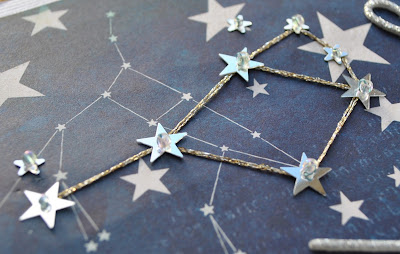 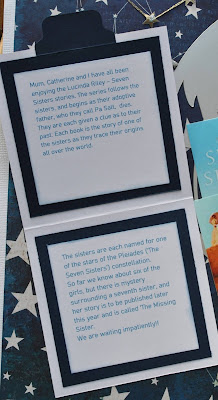 Using some mini typed letter stickers from my stash I added further details.

That's the last of my layouts from the January kit, hope you like them - six layouts has to be good value for money!

Thanks for looking
Lynn x
Posted by Lynn at 08:00